Home In the News 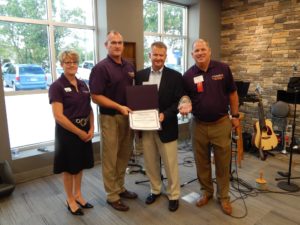 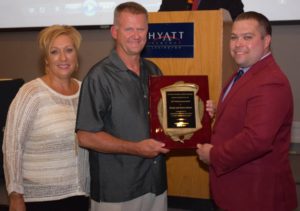 If there is one award that symbolizes the highest appreciation members of the American Association of Meat Processors can bestow on an individual or individuals who have accomplished so much and have done truly special things throughout the years, it is the AAMP Achievement Award.

It is a great honor to make this presentation tonight.  The individuals we are honoring tonight are always willing to share their knowledge, and personal time on behalf of the small meat processing industry and have done so for many years. The recipients of the 2017 AAMP Achievement Award are Randy and Teresa Alewel.

Randy and Teresa operate Alewel’s Country Meats in Warrensburg, Missouri. After Graduating from the University of Missouri with a Bachelor’s Degree in Animal Science, Randy returned home to manage, and then later purchase, the family business, which has served local livestock producers for more than 80 years.

Randy has served on the Board of Directors and has been president of both the Missouri Association of Meat Processors and AAMP. He has also served and chaired numerous committees and is currently the Chairman for the Membership Committee for AAMP. Alewel’s have won numerous awards for their cured meat products at both the state and national levels. In fact, Randy is a member of the Cured Meats Hall of Fame in both MAMP and AAMP.

Randy has served our country in the military since 1981. He served two active duty tours, the first after the 9/11 attacks and the second was a one-year tour in Kosovo with the National Guard. Randy was commissioned as a 2nd lieutenant and moved up through the ranks to eventually become a Brigadier General and the commander of the 35th Engineer Brigade at Fort Leonard Wood in Missouri. Randy is currently retired from the National Guard

Teresa graduated from the University of Missouri with a Bachelor’s Degree in Counseling and Personnel services and earned a Master’s in College Student Personnel Administration from the University of Central Missouri, while she was employed there. Teresa dedicated 26 years to her work at UCM and built a nationally recognized career services program, which she directed.  She served in various leadership roles in the Midwest and National Association of Colleges and Employers.  For over 11 years, she has worked as a certified etiquette trainer and leads multiple courses for the University of Missouri, the Missouri National Guard, and other Universities nationally.

After retiring from the University Teresa joined Randy at Alewel’s Country Meats and assumed responsibility for the drop shipment business, technology, marketing and social media.  As a team, they have continued to expand the business and become even more involved in the local community.

In recognition of their leadership, knowledge, success, and contributions to the meat industry, the American Association of Meat Processors presents its highest recognition, the 2017 Achievement Award, to Randy and Teresa Alewel.